Description: Reconstruction of paleo-oceanography and climate of SE Australia and the Southern Ocean from analysis of deep-sea corals.
Voyage Objectives
The major objective of the voyage is to determine the location of beds of high quality live, sub-fossil and fossil corals of SE Tasmania, that can subsequently by samples on the follow-up US vessel voyage. This objective will be met by deploying the Woods Hole Autonomous Benthic Explorer (ABE). A preliminary identification of probable areas of interest has been done based on analysis of high resolution topographic maps of the survey sites, from results of previous trawl samples of the area and from existing CSIRO video from which three broad areas of interest have been identified: The Southern Seamounts, the Tasman Fracture Zone and the South Tasman Rise. The second objective of the voyage will be to document the biodiversity of the deep parts of the Southeast Commonwealth Maine Reserve Network. The third objective of the voyage is to collect surface plankton samples for invertebrate larvae while steaming across the shelf.
Taken from SS01/2008 voyage plan. 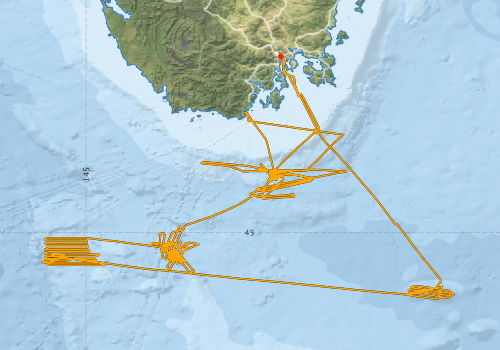