From: Port Adelaide To: Hobart

Description:-
Title: "Estimating the effectiveness of spatial closures for deepwater gulper sharks and associated fishery species"
Scientific Objectives
Areas of seabed in Commonwealth waters off temperate Australia are being closed to fishing as marine reserves are developed by the DEHA, and as spatial closures are increasingly used by AFMA to manage fishery stocks. One current focus for both conservation and fishery closures is the protection of gulper sharks which are under consideration for endangered species listing. Other species and habitats................

Voyage Objectives
1. Map and characterize the benthic ecosystem of the 60-mile closure in the GAB using the EM300 multibeam and quantitative towed camera surveys
2. Quantify the abundance of gulper sharks and associated species, inside and outside the closure by non-extractive quantitative towed camera surveys.
3. Estimate species relative abundances inside and outside the 60-mile closure using non-extractive underwater baited video cameras (BRUVs).
4. Assess the survivorship by gulper sharks and other species following tagging. This will use a specially designed trap with (1) a surveillance camera to monitor behaviour during descent, on the bottom, and during ascent, and (2) an acoustic receiver to track fish movements away from the trap after release.
5. Evaluate movement in and out of the 60-mile closure using two curtains of acoustic VR2 listening stations to detect fish tagged with acoustic V16 tags.
6. Acquire additional deepwater camera calibration data with scalebar and rotating 16-laser array......
Taken from SS200803 Voyage Plan (see link above).

Project:- Determining the ecological basis for spatial management of deep water fishes with a focus on pink ling, gulper sharks and ribaldo [details] 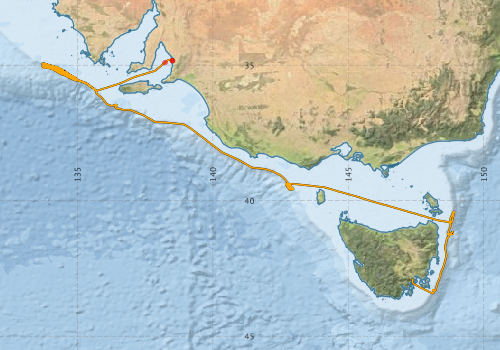