From: Port Lincoln To: Hobart

Description: Southern Surveyor voyage SS02/2006.
Scientific Objectives
There are 2 principal objectives, plus 2 minor ones [one being listed as a piggy-back project].
The first objective is to study large holes that have been found during the AUSCAN 2003 cruise offshore the Murray Canyons Group offshore Kangaroo Island. These holes occur along possible tectonic lineaments from depths between 4,500 and 5,500 m. Water samples [for water chemistry and microbiology] and short cores will be taken in some of the holes in an attempt to determine their mode of formation.
The second objective is to determine, by means of swath mapping and sub-bottom profiling, the location of several of the ancient meanders of the River Murray that would have been formed during periods of low sea level on the very broad Lacepede Shelf. An attempt will be made to link the meanders with the heads of the various canyons of the Murray Canyons Group, and determine if erosion is currently active at those locations. Short cores will be taken on the Lacepede Shelf in an attempt to find a high-resolution Holocene record of fluvial outwash of the Murray. CTD measurements will be taken along some of the meanders to determine whether they act as conduits of continental, fresh waters.
A minor objective is to follow and map in several places the low sealevel stand that occurred 20,000 years ago and dredge wherever possible suitable material for dating and geochemical analysis. (taken from National Facility Voyage Plan SS02/2006) 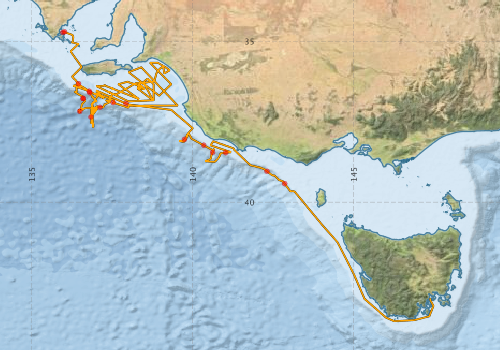